Established since 1875, today Brambles is a global business with more than 12,000 employees.
View our full history below.

Brambles takes its name from
Walter Bramble, who arrived in Sydney, Australia with his English parents in 1858 when he was less than one year old

At the age of 18, Walter established a butchering business. He was a "cut up and deliver" butcher, meaning he transported the meat to customers by boat or horse and cart. Two years later, he had saved enough to move his business to the rapidly growing port town of Newcastle. Walter gradually expanded the transport part of his business

Post World War II, the Australian Government takes ownership of a collection of pallets and other transportation assets left in Australia by the US Army and, in 1946, introduces the name Commonwealth Handling Equipment Pool (CHEP).

Brambles enters the pooling solutions business, buying CHEP from the Australian Government. Brambles changes its name to Brambles Industries Limited and moves its head office from Newcastle to Sydney 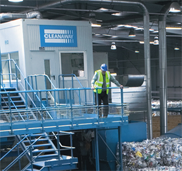 Recall launches as the global records management business of Brambles

Brambles announces it will streamline the group and focus on CHEP and Recall by divesting Cleanaway, Brambles Industrial Services and several other businesses

Brambles unifies its dual-listed companies structure. Brambles Limited becomes the holding company for CHEP and Recall, listed on the Australian Securities Exchange only

Brambles acquires IFCO Systems, the world's largest RPC business, combining it with CHEP's RPC operations, and announces a new segmental reporting structure based on the three Pooling Solutions categories of Pallets, RPCs and Containers, and Recall

Brambles demerges its Recall information management business, which becomes owned by Recall Holdings Limited, a separate company listed on the Australian Securities Exchange and independent of the Brambles Group

Brambles expands its specialist containers business through the acquisition of Ferguson Group, a leading provider of container solutions to the offshore oil and gas sector

Brambles establishes BXB Digital to expand its capabilities in data analytics and develop innovative digital supply-chain solutions for its customers and the supply chains of the future.

Brambles divests its interest in the Hoover Ferguson Joint Venture.

Brambles has received the highest score in the Dow Jones Barron’s sustainability ranking, rated as the most sustainable company globally.